Sir Reginald of Celebrity and Chakra

Background 1: About two years ago

benchilada    sends me details of a story about Sir Reginald A few months later, I create three pages, the first one especially I think a fine illuminated ms. More time passes. The first page is lost, spectacularly recovered and once again goes missing. Numbered hunts prove fruitless. I consign myself to bitter defeat, that project abandoned. Damn, Damn I must work with this Benchilada genius one.

Background 2 : I'm busy til Wednesday working through requirements to pass a module on The Developing Self. Twelves pages of notes A4 stapled one below another. Connecting cognitive behavioural models with self-integration, towards the transpersonal self. Mixing Jean Piaget and Robert Anton Wilson, yes I'm showing off. Strikes me by Bazan Brothers style concept map illustrating a few of the chakra points might be well represented by a thumbnail inclusion of that half-completed page were Sir Reginald prepares to consume a tasty coelcanath.

So, from the odds and end place, 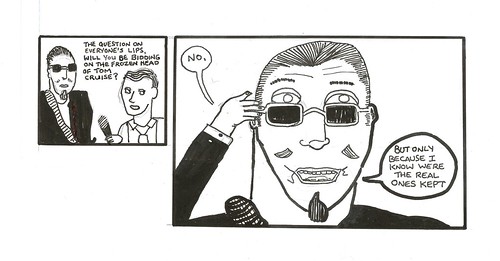 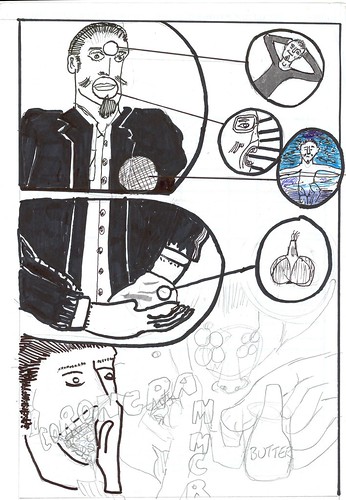 (the garlic coelcanath would of course be chewed slowly)

benchilada's accompanying prose can be found on this link.


Special thanks to Oli Smith who reviewd my 24 hour comic calling it, "THE BEST COMIC OF 2007".

Arts subsidies and grants should be sent to the address on my profile page.
Subscribe