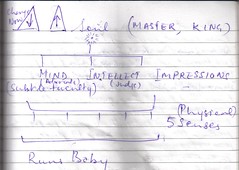 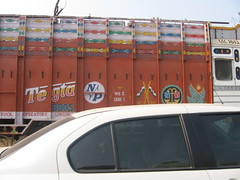 Zarren's sister, the birthday girl, invites me over for chi and says that I am cute. Auntie is telling me about two of me, one composed of light, both inside. I contend a few points (it is morning) (I remember more negatives than positives) The supreme-source-as-god-as-nature that we access cleaning out it's junk in the form of earthquakes? That we're in the iron age: surely some mistake? There are gold days, silver, bronze and iron days. I must remember that these are all just ideas in a system which (when used better) can be malleable. Rachit drives me to Pinjore and the Classic there, the site of my first beloved visit to India three years ago. I admire the build up of houses and still visible mountain range from the roof garden. Light browns, and darker into blue. 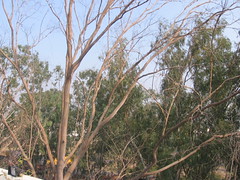 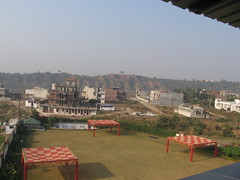 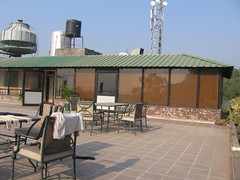 Some roti and chicken curry. Auntie and Zarren's sister spoiled me with roti and ghee (butter) at breakfast. The good spoiling, that my bland Ulster belly can cope with. It had been arranged that I'd spend the afternoon at Pinjore's Yadavindra Gardens. The cab there was a bike. I've been on the back of a bike thrice in my life. The first time we never left the garden gate. So without a helmet, I took the ten minute ride through track and rubble. There are less rules on Indian roads: the computer game racing simulation is practice for a real test whereas in Britain it's all line-marked and drama ranging from a quiet episode of High Road to Eastenders Blood & Death Scream Special arc. When the train passed, we sat with fifteen bikes on one side and five cars to the other: facing down DeathRace 200.

The pocket squirrels whistle like welterweights: when they stay still long enough to be pumping out a fair part of their mouth's air. Pinjore Gardens is very pretty: if Indians had filmed The Prisoner. Or for setting something in Asia, but saving on fare.

Exiting to meet Rachit, a funfair and countless gift shops revealed. I tell him in the car, “look at that sun”, pointing up to the orange egg, “when you go to London next year, take that with you.”
After I got back, Varun, Ahmed and Sam took me out for a chi. Actually, they were getting haircuts and I have little hair. On hindsight, I think I was being taken out out of a sense of (misplaced) responsibility. On the drive back, they taught me how to say “butt-fuck monkey” in Hindi, not half as funny repeated fast as in English. (“Chodie” is fuck) I learned Sector 8, two over, is where monkeys swing free on cables on the front of shops. Perhaps I'll take a walk over tomorrow.